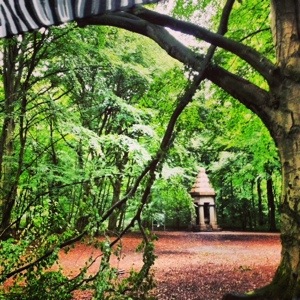 Yesterday I went into town with the intention of practice some street photography during the last day of Malmö festival (Malmöfestivalen). I walked around for a bit, bought a vegan burger and took one step to the right when the sky opened up and rain came crashing down. Lightning and thunder turned up from nowhere and this would probably have been a cool photo session if I hadn’t just bought food. Instead of strolling around and feeling the music I was being cosy under a itsy bitsy teeny tiny roof with 15 other people.

After about 20 minutes I went to the bus and after three stations I realised that this was the right number, but the route had changed and I did not end up where I intended to be.

Anyhow. Somehow I decided to walk home and go through the park. Good decision! It was raining a bit but the park was so green and with almost no people I think I got some pretty good shots. Although I think I have made some setting on my camera so the shutter speed is acting strangely (Seriously, my printer wont work, my computer is acting weird and so is my phone. AND now my camera?! Hey kharma where did you go? 😦 ). So annoying!

Here is just one photo I took with my phone. I’ll show some more another day.

← When things start to break
Crazy down pour in Malmö →